This personal project goal was to learn more about Next.js, React hooks, and explore serverless backend providers to create a web application to manage and share favorite book titles.

As a side project created during 1904labs innovation hours, I designed, developed, and deployed the Next Bookshelf concept application.

I came across a Sam Selikoff's video on Buildng my first Next.js app, and really liked the idea of having a kind of boilerplate CRUD app (in his example, a recipe app) that you might rebuild with different front end stacks.

I think around that time, I had watched a couple sessions from React Europe, one of which covered the Next.js 9.4 release. In the past, I have used Gatsby, but had yet to look at Next, and so I decided to spin up a create-next-app instance and see what I could do.

While I spent a fair amount of time on the design, it wasn't primary to what I was trying to learn. Because the site is faily limited in scope, I didn't have to think about too much. In terms of design, I ended up with only a handful of page types:

I did want to experiment with dark mode and site theming, so I added a theme toggle control. 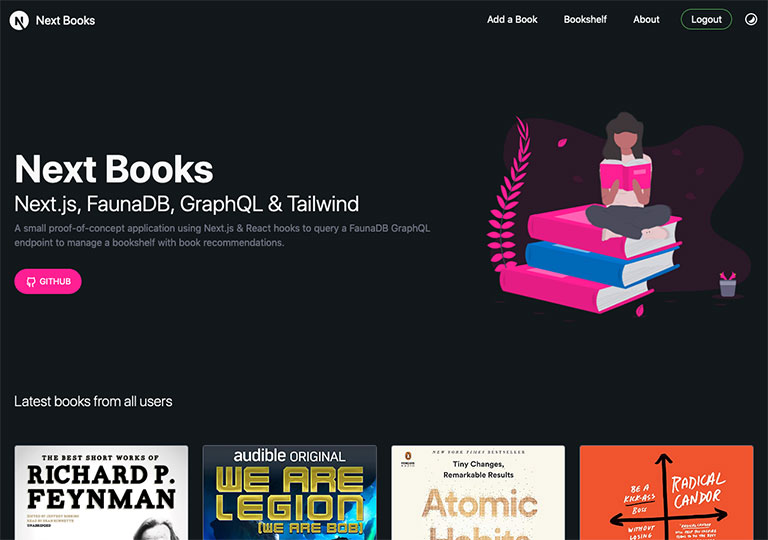 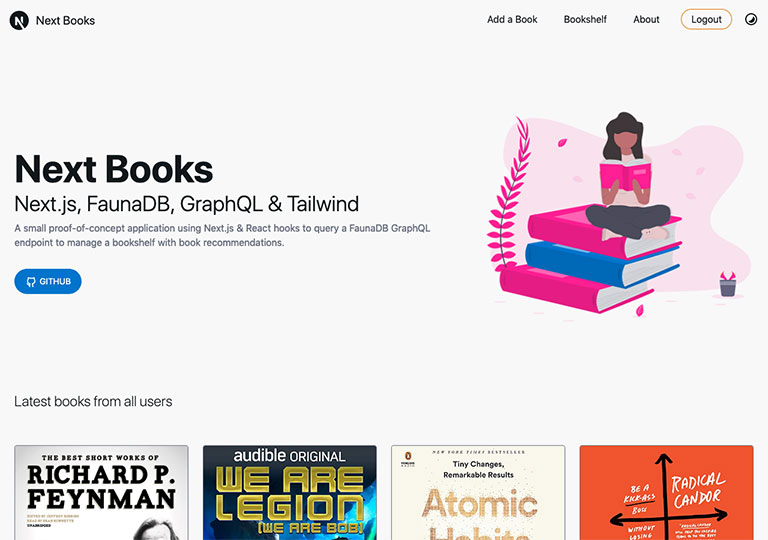 Choosing a colors for each theme is more difficult than I initially considered - even when using a restricted palette, designing for adequate color contrast is challenging. I still have a few unresolved contrast issues in the design.

At risk of looking similar to other sites, I used open source illustrations from Undraw - some with slight modifications. Undraw fills such a primary need that was neglected for so long - free open source artwork. 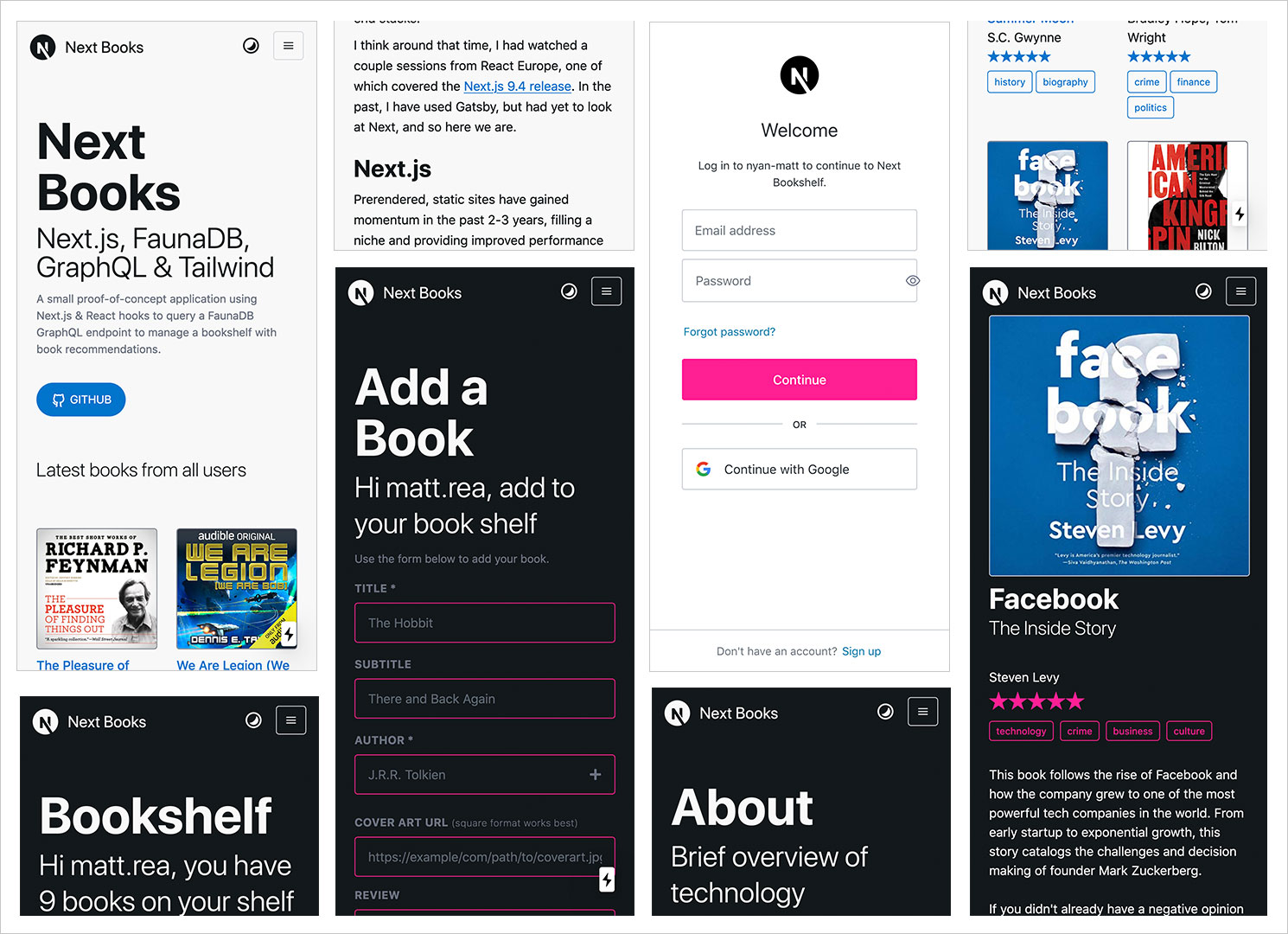 Prerendered, static sites have gained momentum in the past 2-3 years, filling a niche and providing improved performance and developer experience for use cases involving, well... static content. Documentation, brochureware, etc, are great candidates for Gatsby or Next, but I think they are increasingly catching on in cases where we might have used a traditional SPA pattern for more interactive experiences without the bloat.

Features like Incremental Static Regeneration and Dynamic Routes include the best features of statically rendered sites with the flexibility to generate dynamic content at runtime.

It was fairly easy to setup, and now whenever I push to master, my app is built in less than a minute. I also liked that branch deploys were active with zero configuration. Nice!

I didn't start with Fauna as my backend - I actually started with Hasura. I ran into some problems designing and configuring my database (mostly because I'm not really experienced doing so) and I wasn't quite sure how to setup foreign key relationships in Postgres so that I could access them via GraphQL relations. I've heard good things about Hasura, so I chalk this up my lack of determination 😅

I hate to say it, but I think I tried FaunaDB because they had been running a lot of promoted tweets during this time. In any case, Fauna setup "clicked" for me, maybe because you can start with a graphql schema, and once I realized you could create indexes with custom search fields, I felt comfortable setting up what I needed for this app.

This was my first time using tailwind css, and I like the utility-first concept. Boostrap and Bulma are nice, but I would often supplement those base styles with sass spacing utilities. It can get a little repetitive, but you can always extract your own components, or add your own styles.

I began this project using theme-ui, a css-in-js jsx framework with its own components package. Initially I wasn't a huge fan of css-in-js as I found it hard to read. After a few days I got used to it, and enjoyed the flexibility. I could not get what I wanted out of the theme-ui components, so eventually I scrapped the whole thing, and converted to tailwind.

🚨 Bug alert: If you are using Chrome, and are blocking 3rd party cookies, a hard refresh will log you out of the session 😱

There is an open issue with the useAuth package - if I can't figure out a workaround, I might look at another authentication mechanism. If anyone has experience with auth0 and/or useAuth, please let me know!

For this project, it was my first interaction with Next, Fauna, Tailwind, and Auth0 - quite a few new tools to take on at once. Although the functionality is not overly-complex, it was enough to familiarize myself with basic concepts and provided the right amount of non-trivial problems to solve. There are still more items on the todo list, but I'm generally happy with how it turned out.